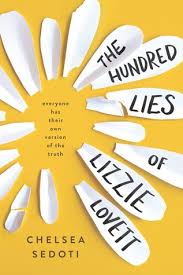 Hawthorn wasn’t trying to insert herself into a missing person’s investigation. Or maybe she was. But that’s only because Lizzie Lovett’s disappearance is the one fascinating mystery their sleepy town has ever had. Bad things don’t happen to popular girls like Lizzie Lovett, and Hawthorn is convinced she’ll turn up at any moment-which means the time for speculation is now.

So Hawthorn comes up with her own theory for Lizzie’s disappearance.  A theory way too absurd to take seriously…at first. The more Hawthorn talks, the more she believes. And what better way to collect evidence than to immerse herself in Lizzie’s life? Like getting a job at the diner where Lizzie worked and hanging out with Lizzie’s boyfriend. After all, it’s not as if he killed her-or did he?

Told with a unique voice that is both hilarious and heart-wrenching, Hawthorn’s quest for proof may uncover the greatest truth is within herself.

Hawthorn Creely is creative and intelligent.  She has a supportive family who love her and respect her.  They’re a little on the weird side (especially her mother) and at times put too much pressure on her, but they are solid. Unfortunately, Hawthorn doesn’t have the same support system when it comes to friends.  She has one good friend in Emily, but their paths are slowly drifting in opposite directions, and she has a slew of enemies and tends to be the perfect target for the mean girls in her high school.

So, when Lizzie Lovett goes missing, it’s no surprise that Hawthorn builds her life around finding out what happened to her.   She inserts herself into Lizzie’s old life and starts to create a story about Lizzie’s disappearance.  The question is can Hawthorn find her own niche by trying to find a missing girl?

This book is dark and sad, but also refreshing.  The characters in this novel are amazing.  Hawthorn is vulnerable and innocent but she grows throughout the story and learns so much about life and who she is.  Unfortunately her growth doesn’t come without heartache.  I so struggled with the mean girl mentality in this novel, but the reality is that there are girls like this in high school.

The characters that are my favorite though were not the main characters.  Sundog and Connor were my favorites by far.  Sundog, the leader of a caravan of hippies, and mentor to Hawthorn’s mom have camped out in the backyard.  His generous wisdom and kind spirit are a huge influence on Hawthorn.  Connor is Rush’s best friend.  He too is kind and sincere and an unnoticed support system in Hawthorn’s life.

The Hundred Lies of Lizzie Lovett by Chelsea Sedoti is an extremely interesting read.  It is slow at times, but it stirred my emotions and made me think.