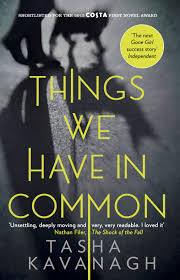 Fifteen‐year‐old Yasmin Doner is a social misfit—obese, obsessive and deemed a freak by her peers at school. With her father dead and her mother in a new relationship, Yasmin yearns for a sense of belonging, finding comfort only in food and the fantasy of being close to Alice Taylor, a girl at school. Yasmin will do anything to become friends with pretty and popular Alice—even if Alice, like everyone else, thinks she’s a freak.

When Yasmin notices a sinister‐looking man watching Alice from the school fence, she sees a way of finally winning Alice’s affection—because how this stranger is staring is far more than just looking, it’s wanting. Because this stranger, Yasmin believes, is going to take Alice. Yasmin decides to find out more about this man so that when he does take Alice, Yasmin will be the only one who knows his name and where he lives…the only one who can save her.

But as Yasmin discovers more about him, her affections begin to shift. Perhaps she was wrong about him. Perhaps she doesn’t need Alice after all.

And then Alice vanishes.

Creepy and dysfunctional, Things We Have in Common by Tasha Kavanagh is a dark and intense YA novel.  I liked the way the story was told through the 2nd person perspective.  It made it interesting and gripping to get Yaz’s perception about what others were thinking and doing.

I was fascinated by the characters in this story.  Yasmin, an immature and socially awkward teenager struggles with everything:  weight, bullying, inadequate support both at home and school and of course the death of her father.  Our life experiences shape who we are and that is definitely the case for Yaz.  All of these targets against her push her into an isolated and lonely reality made up of her dreams and secret thoughts about Alice, the popular girl in school.

The story intensifies as Yasmin’s obsession with Alice transfers over to an obsession with Samuel, the man she believes has abducted Alice.  Yasmin first notices Samuel while she is spying on Alice.  Samuel is doing the same thing, watching Alice.  She devises a fantasy in her head about how he kidnaps Alice and how she saves her.

This is a fast paced read.  I was drawn into it immediately and could not put it down.  Unexpected twists in the story and an unexpected ending will keep you thinking about this novel long after it’s finished.