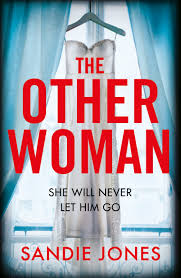 Emily thinks Adam’s perfect; the man she thought she’d never meet. But lurking in the shadows is a rival; a woman who shares a deep bond with the man she loves.

Emily chose Adam, but she didn’t choose his mother Pammie. There’s nothing a mother wouldn’t do for her son, and now Emily is about to find out just how far Pammie will go to get what she wants: Emily gone forever.

The Other Woman is an addictive, fast-paced psychological thriller about the destructive relationship between Emily, her boyfriend Adam, and his manipulative mother Pammie.

The Other Woman by Sandie Jones has interesting characters, and an interesting storyline, but the plot twists were a little disappointing.  Emily meets Adam in a bar and an attraction forms immediately.  She is introduced to his mother within weeks of their dating and isn’t received well.  Pammie takes a disliking to Emily and is not afraid to let her know.

Emily is a strong woman:  independent, hardworking and likeable at the beginning.  As the story progresses, I found her to be a little too whiny and arrogant.  She’s a good opponent for Adam’s mother in the beginning of the book.  Unfortunately, she has the tendency to talk things up but when push comes to shove, there wasn’t any follow through.

There’s that old saying about how a man treats his mother tells you how he will treat his wife.  Well, Adam is successful, good looking, and loves his mother.  Unfortunately, his loves his mother a little too much, leading him to take her side over Emily’s a little too often.  Pammie is strong, manipulatie and intelligent.  She knows how to work her son to her advantage and makes it very clear that her son will marry Emily “over her dead body.”

There are twists and then there are twists, obviously things are not always as they seem.  I was waiting for the “Oh, crap!  That didn’t just happen,” twist, making me flip back through pages to see what and how I missed it coming.  Instead, I found myself saying, “Hmmm” and finished reading the book.

Although the plot twists didn’t rate very high on my list of unexpected turns in the story, the book was still enjoyable.  There was suspense and mystery.  I just didn’t find the ending a surprise.